Top Posts
How to Use High-Intensity Interval Workouts for Weight Loss: A Guide for Beginners
How To Start Working Out Again After A Long Break
Introduction to Isolation Exercises: Best Isolation Workouts To Get Shredded
Best Pull Up Variations for Muscle Building and Stronger Back
Easy and Impressive Exercises that Keeps Teenagers Fit
All About Tabata Workouts: Beginners Guide of Effective Weight Loss and Total Body Workouts
Best Upper Back Exercises, The Key To Killer Upper Body
10 Ways to Exercise for People Who Hate Exercising
Balanced Pre-Workout Meal for Successful Exercise Routine: Best Things to Eat Before a Workout Session
Best Pilate Exercises for Weight Loss, Toning and Strengthening
Effective PCOS Exercises for Weight loss and Rectifying Hormonal Imbalance
10 Best Exercises for Building Stronger and Bigger Traps
10 Best Hamstring Exercises You Need to Incorporate in Your Fitness Routine For Stronger Legs
Best Lat Exercises to Build Perfect Back and Achieve V-Taper
The 7 Minute HICT Workout Science That Actually Works on Weight Loss
8 Best Pre Workout Supplements for Muscle Building & Weight Loss
Easy and Effective Workouts for Men Over 40 to Lose Weight And Stay Fit
Running vs Cycling: Which is the Better Cardio Workout For You and Why?
Stay Fit on Vacations: 8 Best Bodyweight Exercises Without Equipment
7 Different Exercises Routines to Build Core Strength at Home
Workouts

Arms and chest are two of the most prominent parts of the body that catches the eye and that’s why most men are obsessed with arms training. Effective biceps and triceps exercises using free weights are the best way to increase muscle mass and have huge and powerful arms. The best thing about arm exercises using weights is that they show results within a few weeks’ time. The biceps and triceps workout using free weights mentioned in this article can be done anywhere you like – either at home or in the gym.

The Major Arm Muscles that Must be Trained

We all know that the arms comprise of two major muscles – the biceps and the triceps. Let us take a close look at the muscles and how they work in an effective way. 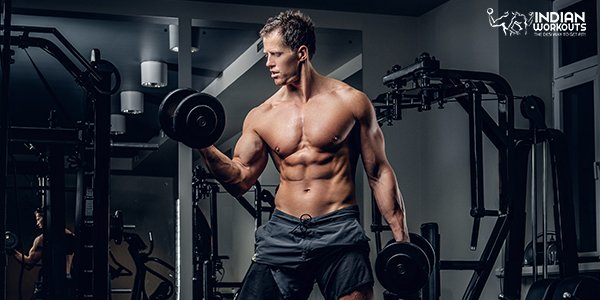 When it comes to bodybuilding, the biceps are one of the most popular muscles that attract a lot of attention and publicity. Therefore, it is important to target the bicep muscles – specifically the biceps brachii, brachialis and brachioradialis by performing curls using dumbbells and barbells.

Barbells are one of the elementary equipments for increasing the muscle mass of the biceps, forearms and shoulders. The barbell bicep curl is one of the best arm exercises that use the pull mechanism to work the biceps brachii along with the brachialis and brachioradialis. 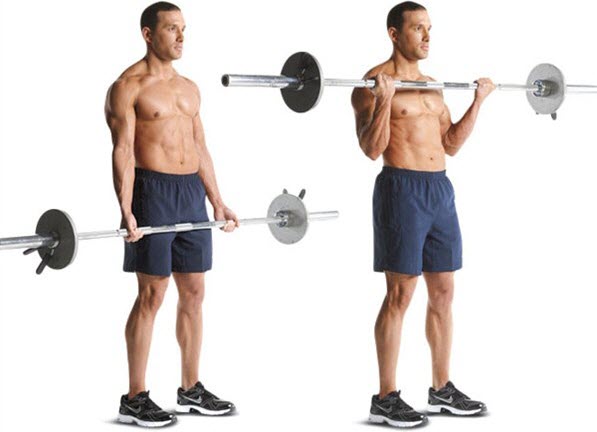 Stand with an upright torso, holding a barbell with both hands placing the hands shoulder-width apart. The palms of the hand should face forward and elbows should stick close to the torso. Now, curl your arms and pull the weight up by contracting the biceps while exhaling. Continue to pull up till the biceps are fully contracted and the bar is at the shoulder level. Hold the position for a few moments and then slowly lower the weight back while inhaling.

The alternating dumbbell curls are one of the time-tested bicep exercises for men that help in gaining muscle mass. This exercise targets the biceps and also involves the anterior deltoid and trapezius muscles to enhance stabilization. The alternating movement works both arms at the same time. 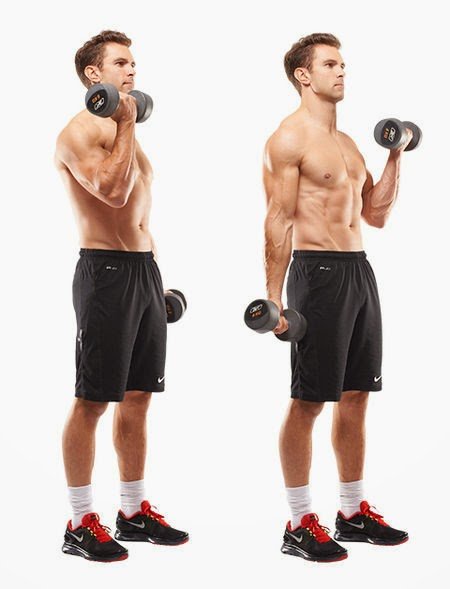 Stand with your torso upright, holding a dumbbell in each hand, keeping the elbows close to the torso and palms facing the thighs. Now, curl the right hand up while keeping the upper arm fixed till the palms are facing forward. Continue to contract the biceps while exhaling till the dumbbells are at shoulder level. Now, slowly lower the dumbbell to the starting position and repeat the movement with your left hand. 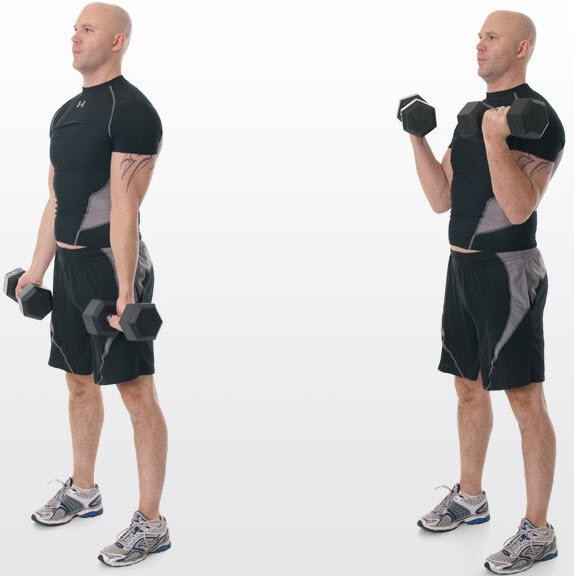 Stand with an upright torso, holding a dumbbell in each hand and the elbows kept close to the torso. The palms should face the torso. Now, curl the weight forward by contracting the biceps while exhaling. Continue to raise the weights till the biceps are fully contracted and the dumbbells are at shoulder level. Hold the position for a few moments and slowly lower the weights to the starting position while inhaling.

The E-Z bar bicep curl is one of the power packed exercises for arms and shoulders that adds variation to the classical curls and gives some rest to the wrists and elbows. The E-Z bar is more effective than the straight bar in many ways because the grip used for this equipment lets the wrists and elbows remain in a more natural position compared to a straight bar. This exercise is useful for fast muscle gain in the upper arm area. 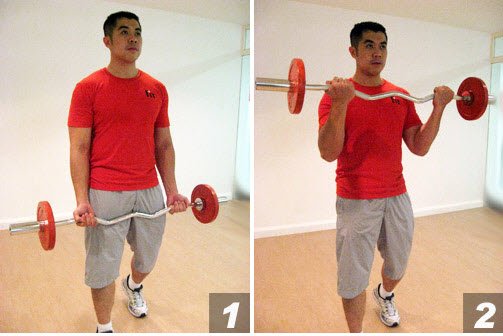 Stand straight holding the E-Z bar, with the palms facing forward. Now, exhale and curl the weight forward by contracting the biceps. The upper arms should be kept stationary. Raise the weight till the biceps are fully contracted and the bar is at the shoulder level. Now, slowly lower the bar down while inhaling.

The chin up is one of the most functional exercises for upper arms that challenges and strengthens a number of muscle groups of the arms and the back. This exercise targets the muscles of the shoulders, chest and back along with posterior deltoids, biceps, triceps and lower and middle trapezius. 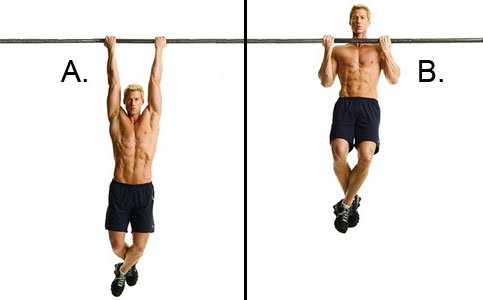 Hold a pull-up bar with both hands placing the hands closer than shoulder width, palms facing your torso. Push your chest out and create a slight curve on your lower back. Now, exhale and pull your torso up till your head is at the level of the bar. Use the bicep muscles to do the pull-up. Slowly lower your body to the starting position.

The triceps are the 3 part muscle present on the back side of the upper arm. It is important to shape the triceps and make them larger and stronger through weight training which also prepares the body for weightlifting and powerlifting.

The triceps dips are one of the best tricep exercises that are essential for building stronger and bigger upper arms. This is the only exercise that hits all the major triceps muscles all at once. Triceps dips also allow you to gain muscle mass fast because of a significant amount of weight lifting. This exercise can be done using a stable chair or bench. 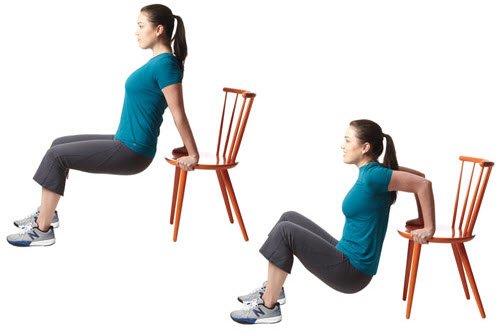 Place your hands at the edge of a bench, keeping them shoulder-width apart. Now, lift your butt off from the bench by extending your legs in the front. Bend your elbows to lower your body towards the floor till your elbows are at a 90-degree angle and then straighten your elbows to lift your body up and return to the initial position. Feel the tension in the triceps all through this exercise.

Closed-grip bench press is the best tricep exercises for mass gaining that helps in developing huge triceps. This exercise works all the muscles of the upper arm and also helps in building strength. This exercise also helps in adding definition to the inner chest by magnifying the separation between the two pecs. 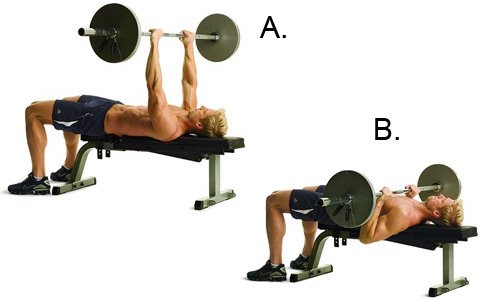 Lie down on a bench and grip a barbell using close grip about shoulder-width. Now, bring the bar down to your middle chest as you inhale and then push the bar back towards the ceiling by extending your arms fully. Lock your arms in this contracted position and hold for a few moments. Then, slowly lower the weight down again. 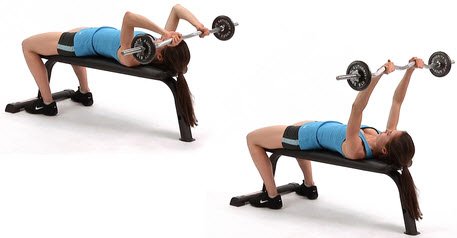 Attach weights to an E-Z bar and lay down on the bench with your arms extended overhead. Hold the E-Z bar with an overhand grip and slowly bend your arms at the elbow to lower the bar beyond your head until your arms form a 90-degree angle. Your upper arms should stay fixed at all times. Now, raise the bar up by extending your arms upwards.

Overhead lateral triceps extension is one of the power packed exercises for upper arms that trains the three-headed muscle group of the triceps known as the long, medial and lateral heads and promotes the gain of muscle mass. 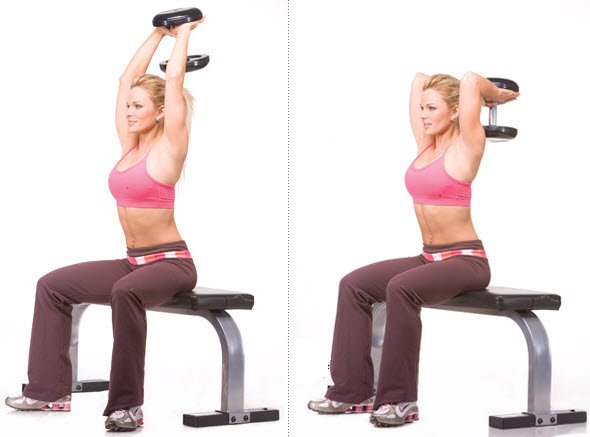 Hold a dumbbell and sit on a bench. Now, bring the dumbbell up to your shoulder and extend the arm over your head so that it is perpendicular to the floor and next to your head. Keep the other hand fully extended on the other side. Rotate the wrist so that the palm holding the dumbbell faces forward. Now, slowly lower down the dumbbell behind your head by keeping your upper arms stationary and then return to the starting stance by flexing the triceps. Repeat the same with the other arm.

The reverse one-arm cable triceps extensions one of the best tricep exercises the uses the pull force to strengthen the muscles of the upper arms. This exercise requires a cable in order to be executed properly. Grab the single handle of the cable pulley with your right hand, standing directly in front of the weight stack. Pull the handle down so that your elbow and upper arms are locked at the side of your body. Keep the other arm by the waist. Now, inhale, contract your triceps and pull the handle down to your side till your arm is straight. Slowly return to the beginning position while exhaling. Repeat the exercise with the other hand as well. 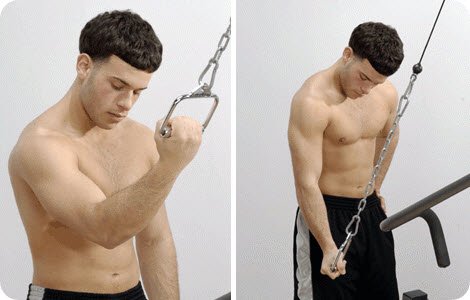 Now turn your dream of developing ripped and muscular arms into a success with these effective exercises for biceps and triceps using dumbbells and barbells and say goodbye to skinny arms.

10 Amazing Resistance Bands Exercises for Toning and Strengthening the Muscles

All About Tabata Workouts: Beginners Guide of...

Get Rid of your Muffin Top with...

11 Best Water Workouts to Beat the...

A Full Warm-up Routine for Cardio –...

How to Lose Weight with Vinyasa Yoga