Top Posts
How to Use High-Intensity Interval Workouts for Weight Loss: A Guide for Beginners
How To Start Working Out Again After A Long Break
Introduction to Isolation Exercises: Best Isolation Workouts To Get Shredded
Best Pull Up Variations for Muscle Building and Stronger Back
Easy and Impressive Exercises that Keeps Teenagers Fit
All About Tabata Workouts: Beginners Guide of Effective Weight Loss and Total Body Workouts
Best Upper Back Exercises, The Key To Killer Upper Body
10 Ways to Exercise for People Who Hate Exercising
Balanced Pre-Workout Meal for Successful Exercise Routine: Best Things to Eat Before a Workout Session
Best Pilate Exercises for Weight Loss, Toning and Strengthening
Effective PCOS Exercises for Weight loss and Rectifying Hormonal Imbalance
10 Best Exercises for Building Stronger and Bigger Traps
10 Best Hamstring Exercises You Need to Incorporate in Your Fitness Routine For Stronger Legs
Best Lat Exercises to Build Perfect Back and Achieve V-Taper
The 7 Minute HICT Workout Science That Actually Works on Weight Loss
8 Best Pre Workout Supplements for Muscle Building & Weight Loss
Easy and Effective Workouts for Men Over 40 to Lose Weight And Stay Fit
Running vs Cycling: Which is the Better Cardio Workout For You and Why?
Stay Fit on Vacations: 8 Best Bodyweight Exercises Without Equipment
7 Different Exercises Routines to Build Core Strength at Home
Fitness Equipment

Make way for a new and ground breaking fitness equipment – Battle Ropes. Battle Ropes have grabbed the limelight because of their capacity to work out all the muscles of the body within a limited time period. To add to its benefits, battle rope exercises show results more rapidly compared to resistance training using weights and plain cardio, which helps in burning fat and increasing muscle mass. These are the only two basic reasons why the modern human race hits the gym every day. The Battle Ropes System was first developed by John Brookfield, who created this system to increase his strength and stamina. The workout presented incredible results and has since been included in the training sessions of world class athletes and sportspeople. 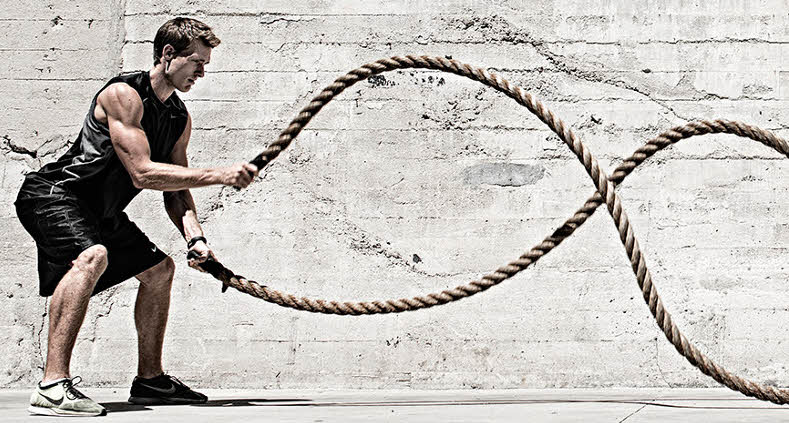 Why Should You Opt for Battle Ropes?

The New Year brings new hopes and promises and whether you admit it or not, one of the most important (and commonly ignored) resolutions in your New Year Resolution List is probably getting back into shape and working out. What better way to cross the resolution off the list and fitting into those smart outfits than with battle ropes – the total body workout. Here we have listed the 5 most common battle ropes benefits to convince you to make good on that resolution. 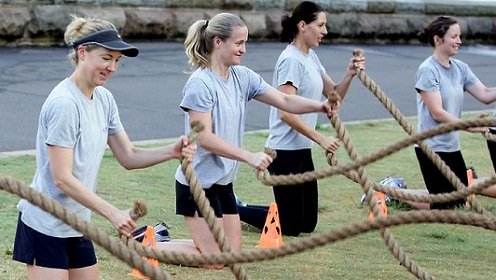 The most important point that has increased the popularity of battle rope workouts is that it makes for a quick yet powerful workout session that works all the muscles of the body and doesn’t take much time. In today’s world, most of us are hard pressed for time and it becomes difficult to spend 2 or 3 long hours in the gym every day. In such cases, 20 minutes of battle rope exercises can provide the benefits of an hour-long complex cardio session.

Battle rope workouts have replaced the traditional format of workouts where people used to do an hour of resistance training to build muscles and then hit the treadmill for additional 30 minutes for burning fat. Battle ropes are all-in-one exercises that not only work as resistance training to build muscles of biceps, shoulders and legs, but also help burn fat at the same time. 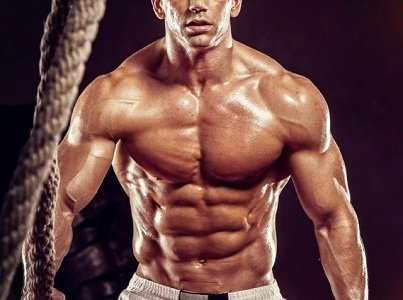 Why waste time working the various muscles of the body individually using countless equipment when the wide array of battle rope exercises can help in engaging multiple muscles at the same time? Battle rope moves can be modified and changed to work the shoulders, arms, biceps, legs, back and abs all at the same time. And what’s even better is that you can also combine standard exercises like push-ups, squats and lunges with the battle rope workouts to make them more effective.

Adjust to your Level

Although advanced level battle rope training can be ruthless and extreme, the workouts can be easily adjusted and toned down to suit your fitness level. The risk of exercise related injury is much less in the case of battle rope routines and fitness enthusiasts can start off with the beginners level, and slowly move on to the intermediate and advanced level as their strength, stamina and range of motion gradually increase. 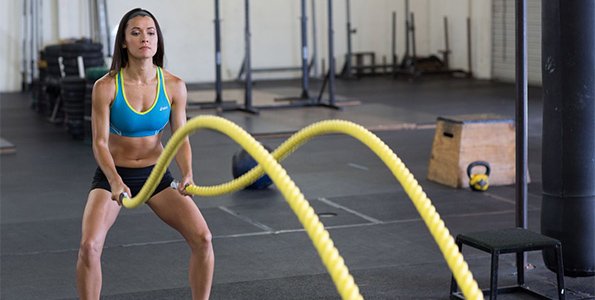 One thing is for sure, with battle ropes there is very less chance of getting bored. Working out each and every day on treadmills, spin bikes and elliptical machines where there is no chance of variation other than increasing the speed can become a bit boring. But the situation is different in the case of battle ropes. You can bring about as many variations as you like and you can even workout with battle ropes in the beach or the park.

This new fitness equipment has been in the news for all positive reasons and is making its place in all gyms and health and fitness institutes because of its ability to work all the muscles of the body simultaneously.

Let us begin with the basic battle rope exercises that can help in providing a toned body and fitter form in very less time. These exercises work out the entire body at the same time and can be seen as one of the most effective total-body workouts. 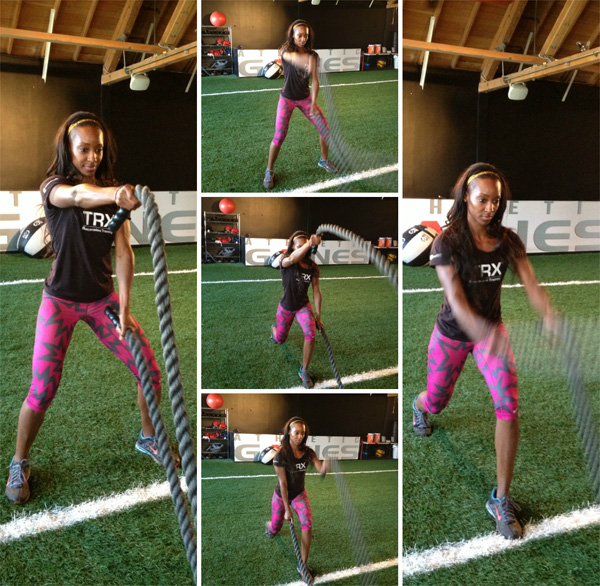 Battle rope exercises are the new killer workouts that help in fast fat burning and improving strength and stamina by providing the ultimate resistance. This is one of the basic rope workouts that help in providing a fitter form by engaging the arms, abs and legs. Start by facing the anchor, the end of the ropes in each hand and feet placed shoulder-width apart. Move both the arms up and down in a rapid motion to create consistent waves in the rope. Don’t forget to keep your core engaged at all times. 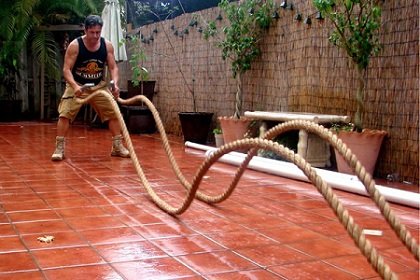 Alternate waves using battle ropes are quite similar to the Double Waves, the only difference being you move one arm at a time to create alternate waves with the ropes. These power-packed moves help in providing toned and ripped arms in very less time. Begin by facing the anchor, feet placed shoulders width apart and hold the ends of the ropes in each hand. Now, raise the right arm to shoulder level and bring it down quickly. Directly raise the left arm and bring it down rapidly. Continue this movement by alternating the arms to create alternate waves with the ropes for as long as you can. 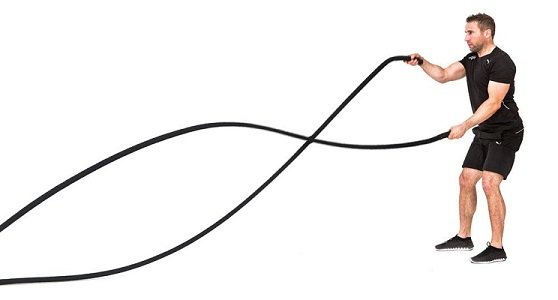 What’s the use of a chiseled body without well-toned shoulders? The shoulder circle is one such workout with battle rope that helps in toning and strengthening the shoulders. This is particularly important in case of swimmers and boxers. Begin by holding the end of the ropes with each hand, feet placed shoulder-width apart and knees bent slightly. Now, raise your arms over the shoulder and start moving them in a circular motion. Move them in clockwise circles for 30 seconds and anti-clockwise circles for another 30 seconds alternately. 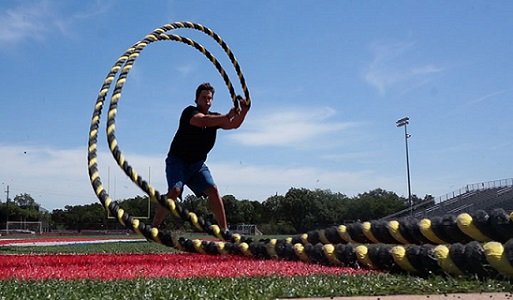 Snakes on the Floor

This is one of the killer shoulder workouts using fitness ropes that tones and strengthens the upper body within a few days. Begin the workout by standing straight facing the anchor, feet placed slightly more than shoulder-width apart. Hold the ropes in both hands and lower your body into a squat position. Now lower your arms to the floor and start moving them over the floor so that the ropes move like two snakes on the floor. Remember not to cross your arms at any point in this exercise. 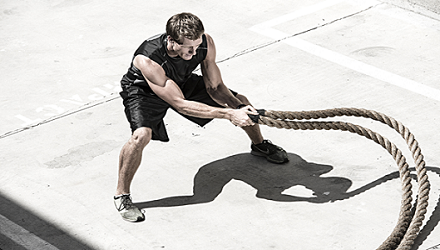 Now begins the list of tough exercises that’s surely going to make you sweat and ache, but the ultimate results that you will see will be reward enough to endure the hardship. 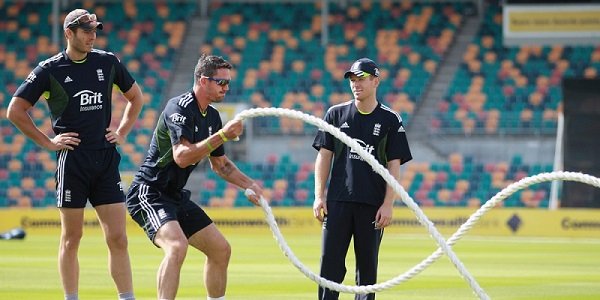 The Power Slam move is the first exercise of intermediate battle rope training that calls for a lot of strength and stamina. Stand straight facing the anchor with the end of the ropes in each hand and feet placed hip-width apart. Now, raise your arms overhead and bring them down forcefully to slam the ropes with all your strength on the floor by lowering your body to a squat. Return to the standing position instantly and repeat this move. 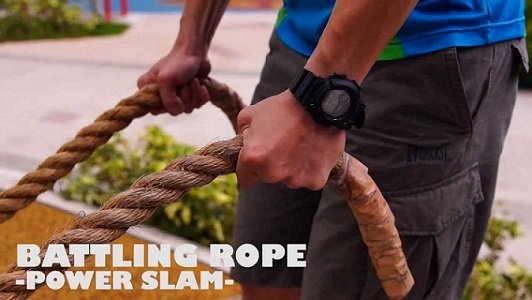 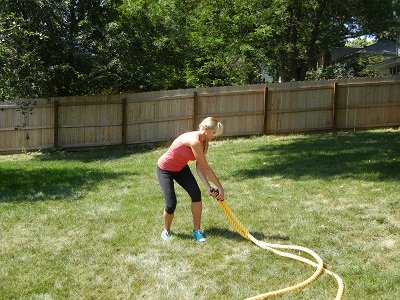 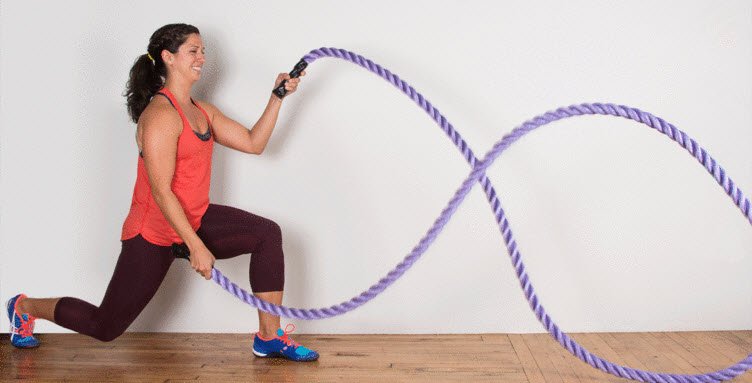 This battle rope move is a combination of Alternate Wave and lunges. Begin this workout by holding the ends of the ropes in both hands. Move the arms alternately to create alternate waves with the ropes. Now do a reverse lunge by putting your right leg back and jump up to switch legs and repeat the reverse lunge with your left leg extended behind. Do all this while continuing the alternate wave as smoothly as possible and maintain your head and chest up all through this move. 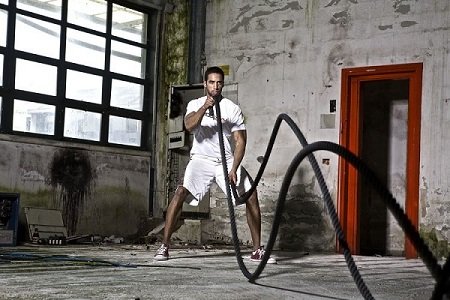 These moves can be done only after mastering the lunge and wave moves of battle rope training. Doing them perfectly might take some time and you will need to be persistent and determined. 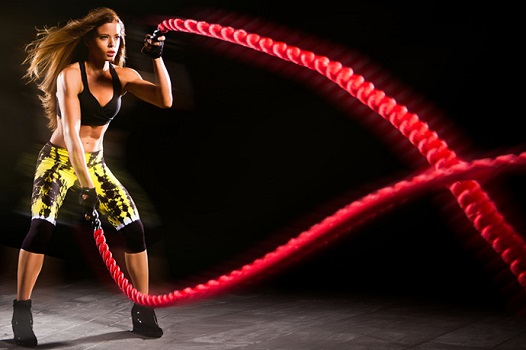 The Star Jumps is the king of cardio exercises using workout ropes that pumps up the heart rate and works the muscles so hard that you can feel the burn. Begin this move with a squat, holding the ends of the battle ropes in each hand. Now, jump up as high as you can spreading your legs to the sides and swing the arms over your head to create waves with the ropes and land in the squat position. Repeat this move as fast as you can without losing form. 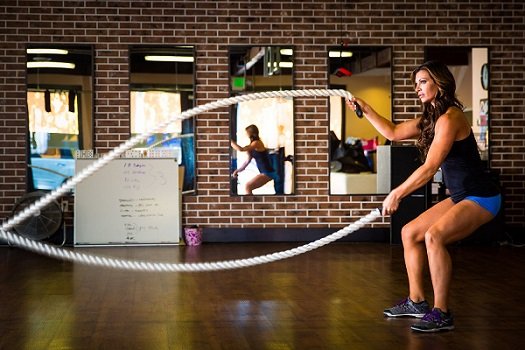 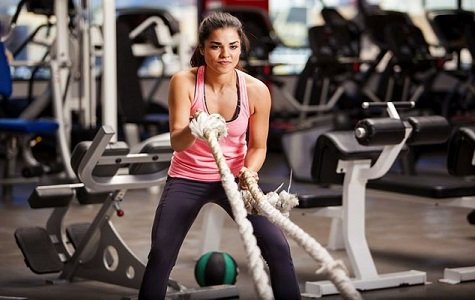 Get ready to make your shoulder press even more power-packed with the Squat to Overhead Press move. Begin with your feet placed a bit more than shoulder-width apart and grab the ropes over your shoulders. Make sure you can feel the tension in the ropes. Now lower your body into the squat position while raising the battle ropes overhead. Return to the standing position and repeat this move again. 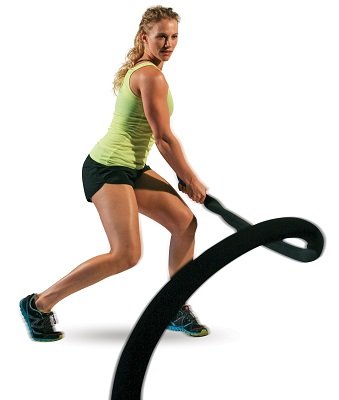 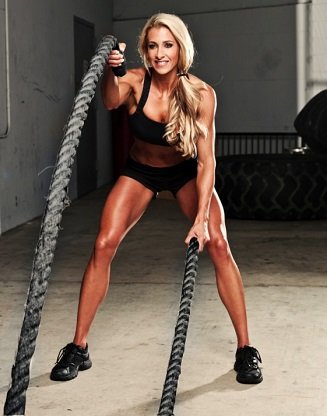 Get your body moving to the rhythms of the battle ropes and get ready to rock those sexy jeans, tight tees and funky shorts this summer.

Top 5 Adventure Sports That You Can...