Top Posts
How to Use High-Intensity Interval Workouts for Weight Loss: A Guide for Beginners
How To Start Working Out Again After A Long Break
Introduction to Isolation Exercises: Best Isolation Workouts To Get Shredded
Best Pull Up Variations for Muscle Building and Stronger Back
Easy and Impressive Exercises that Keeps Teenagers Fit
All About Tabata Workouts: Beginners Guide of Effective Weight Loss and Total Body Workouts
Best Upper Back Exercises, The Key To Killer Upper Body
10 Ways to Exercise for People Who Hate Exercising
Balanced Pre-Workout Meal for Successful Exercise Routine: Best Things to Eat Before a Workout Session
Best Pilate Exercises for Weight Loss, Toning and Strengthening
Effective PCOS Exercises for Weight loss and Rectifying Hormonal Imbalance
10 Best Exercises for Building Stronger and Bigger Traps
10 Best Hamstring Exercises You Need to Incorporate in Your Fitness Routine For Stronger Legs
Best Lat Exercises to Build Perfect Back and Achieve V-Taper
The 7 Minute HICT Workout Science That Actually Works on Weight Loss
8 Best Pre Workout Supplements for Muscle Building & Weight Loss
Easy and Effective Workouts for Men Over 40 to Lose Weight And Stay Fit
Running vs Cycling: Which is the Better Cardio Workout For You and Why?
Stay Fit on Vacations: 8 Best Bodyweight Exercises Without Equipment
7 Different Exercises Routines to Build Core Strength at Home
Home WorkoutsStrength TrainingYoga

What is Power Yoga? Effective Poses for Weight Loss, Toning and Combating Stress

Have you been struggling to lose weight? Are you bored with the traditional gym workouts? Does an hour of workout leave you exhausted and energy-deprived? Well, then you must give a chance to the emerging fitness trend of a power yoga workout. It is a reference to the westernized version of traditional yoga practice. Essentially, power yoga is a customized style vigorous approach to vinyasa practice. Let’s learn more about this fitness-based practice that is deemed quite effective for weight loss and toning. 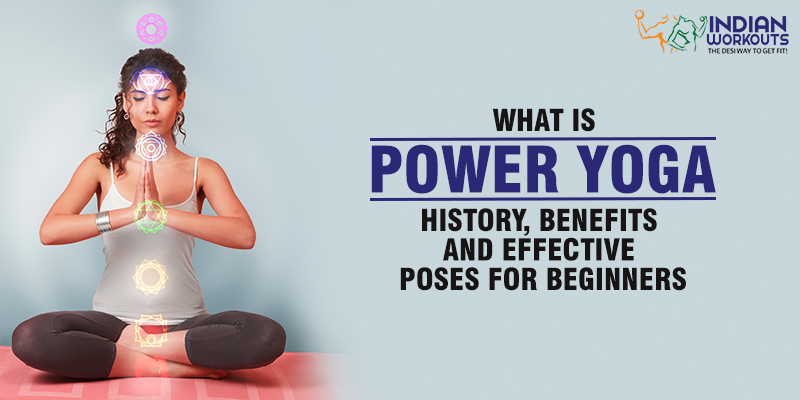 What is Power Yoga?

Trends hint that power yoga exercises are gaining massive attention from the younger generation that is constantly striving for something new and powerful. It is considered to be a holistic approach to not only lose weight but also rejuvenate the body, maintain good health and have a stress-free life. Apart from this, experts vouch for the physical, spiritual and emotional benefits it offers. This means that power yoga poses will not only help you burn calories, but also by the end of the session you will notice feeling calmer in your mind and energized in your body.

Power yoga is an intense, challenging, and fast-paced yoga style that helps in achieving physical fitness goals effectively. This fitness routine finds its origin in Ashtanga yoga, a highly-structured vinyasa style yoga. Both the forms of yoga follow a few basic modalities such as building body heat while moving quickly in flow throughout the sequences. During the practice, one must be able to find a connection between breath and body movements.

While Ashtanga yoga follows prefixed sequences, power yoga is flexible. Each class has a different flow of postures in an attempt to maintain diversity during the practice. There is a strong emphasis on postures that will get your heart racing, help you build strength and enhance flexibility in the body. The effects of power yoga workout resemble those of an intense cardio workout. This is simply because the session follows a dynamic vinyasa flow style.

This modern-day version of Ashtanga yoga has found its way in modern fitness centers. Since it is more of an aerobic style yoga, fitness clubs commonly organize power yoga workout classes, which is why it is often referred to as “gym yoga.” 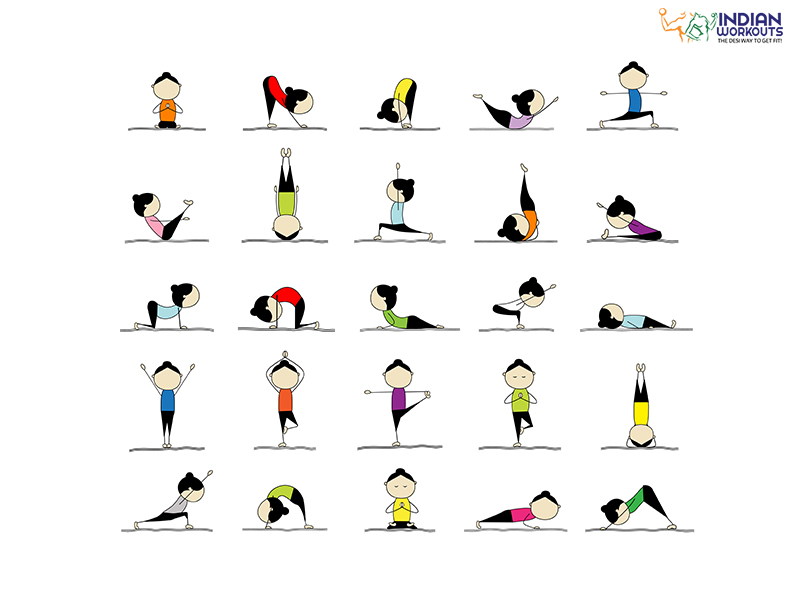 This is one of the first types of yoga that goes beyond traditional yoga systems. It is one of the first references in the history of modern yoga and relatively a new one. Unlike traditional yoga styles, it originated from the west. It was founded by Beryl Bender Birch in the mid-1990s. Originally, she was a follower of Ashtanga yoga. Later, however, she wanted to develop a discipline more suitable for students in the west. She wanted a dynamic workout like Ashtanga yoga but wanted to move away from the restrictions it has. Hence, power yoga is an active style of yoga that allows freedom to design and customize a routine.

What is the difference Between yoga and power yoga?

Yoga is an ancient discipline practice of mind and body. It aims to master breath and mind control and develop a mind and body connection. It includes several techniques such as breath control, meditation, and bodily postures known as asanas to attain good health and state of relaxation. As for power yoga, it is one of the youngest branches of yoga centered on physical fitness.

The basic difference between traditional yoga and power yoga is the speed of practicing postures. Performance of asanas in yoga is relatively slower, maintaining a uniform structure and flow. Meanwhile, power yoga, an offshoot of ashtanga yoga, is known to follow a rhythmic flow that is faster than the traditional yoga.

There is a vast difference in the focus of the practice. The speed of the practice in yoga is essentially slower because it aims to accomplish correct posture during each pose. As for power yoga exercises, due to their fast speed, body movement remains the focus.

More difference between yoga and power yoga suggest that yoga can be practiced by everyone. People of all ages can perform this practice to improve their health. However, power yoga is a physically demanding workout. Therefore, it cannot be practiced by old people with mobility limitations or people suffering injuries, osteoporosis or arthritis.

Yoga aims to create a balance between inner and outer self. Whereas, power yoga is considered effective for physical fitness.

There are numerous benefits of power yoga workout that can help you achieve fitness goals and live a fitter life. Here are some advantages of power yoga.

Power yoga can be a great way to lose weight as well as tone your body simultaneously. When compared to other forms of exercises, it is considered to be an effective way of losing weight. The connection between your mind, body, and spirit will help you in your weight loss journey and make necessary lifestyle changes. The vigorous practice will help you burn fat and calories and increase self-awareness.

Take note that power yoga should be avoided if you are pregnant, are suffering from injuries or have a severe illness.

1. Dhanurasana or Bow Pose: It is sometimes also known as Urdva chakarasana. It derives its name from the shape that the body takes while performing it. Those who suffer from spinal cord and disc problems should not perform this power yoga pose.

Technique: For the starting position, lie down on your stomach with your feet hip-width apart and arms on the sides. Now, fold your knees and reach out for your ankles. Lift your chest up and look forward. Now hold the pose for a few seconds before coming back to the starting position. 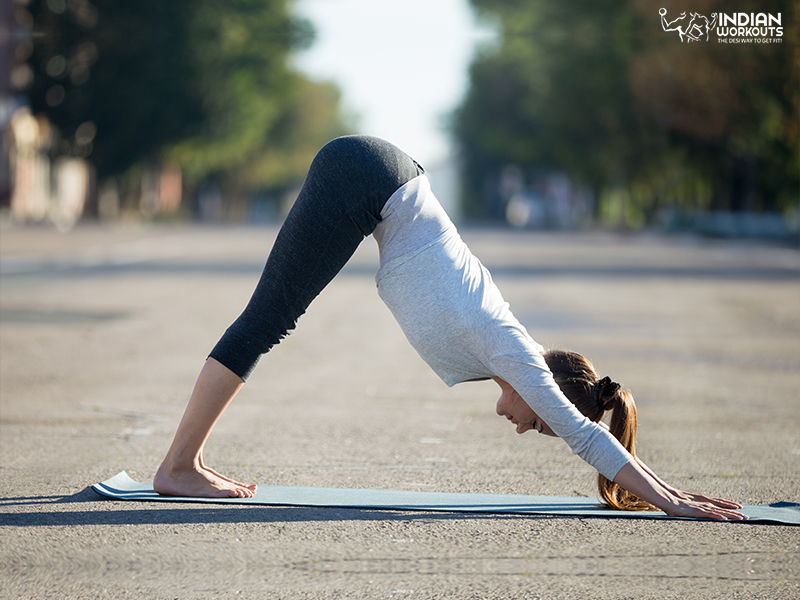 Technique: Start in the downward dog position while placing yourself on all four limbs. Once you have established a good balance in the body, engage your core muscles and press palms into the ground firmly. Now, lift your right leg upwards to the ceiling. Keep the leg straight for 5 seconds before lowering down the leg.

3. Bhujangasana or Cobra Pose: This is one of the basic back-bending exercises and power yoga asanas for weight loss. It is commonly performed during sun salutations and other vinyasa flow yoga. It helps in strengthening the core and toning the abs. 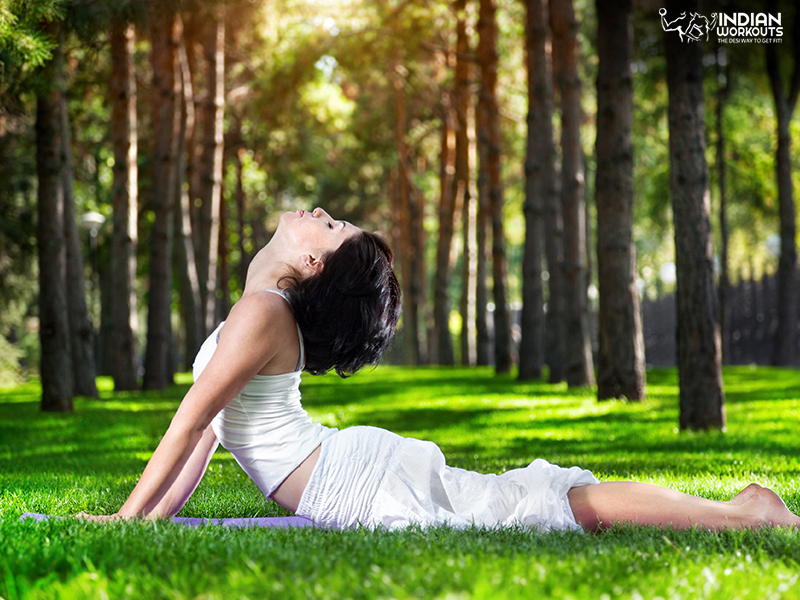 Technique: Start by lying down on the floor on your belly and arms on the side. Lift your upper body off the floor and curve backward. Look up and hold the pose for a few seconds.

4. Plank pose or Phalakasana: Plank pose is one of the fundamental exercises that helps in strengthening core, arms, legs, and shoulders. Beginners must practice this pose in order to perform advanced positions effectively.

Technique: You must start in downward dog pose and then move your torso forward until arms are perpendicular to the floor. The shoulders should be directly over the wrist and torso must be parallel to the floor. Maintain straight alignment between neck and spine and hold the pose for at least 30 seconds.

5. Side plank pose or Vasisthasana: There are several modifications of a plank to practice. When moving forward from the basic plank, side planks are considered amazing for toning and strengthening upper body muscles. 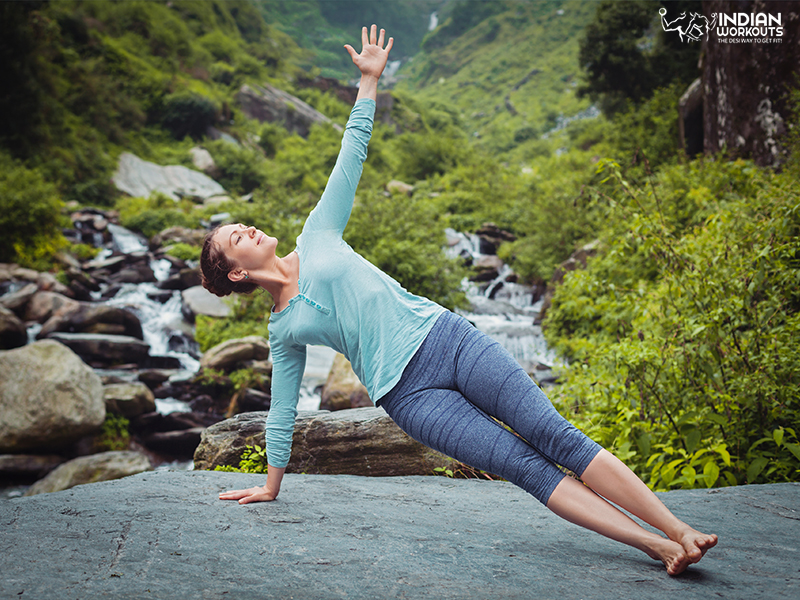 Technique: Begin in basic plank pose and slowly start to transfer your weight to the right hand. Now, remove your left hand off the ground and move it upwards. Slowly roll to the sides with the support of your outer edge of the right foot. The left foot shall find a place on the right foot and keep the legs straight. Now, gaze over your left fingertips and hold the posture for several breaths.

6. Uttanpadasana or raised feet pose: This position is extremely beneficial for lower belly fat and helps you achieve a flat stomach. For anyone who is doing power yoga for weight loss, must perform this posture for quick results.

Technique: Lie down on your back and stretch your legs fully. Place your hands on the side of your thighs and raise your legs slowly to a 30-degree angle. Now maintain this position for a few breaths and repeat the movement.

7. Ardha Chandrasana or half-moon pose: This power yoga exercise demands strength and flexibility. It can only be performed after you have mastered the basic poses. It must be performed on an empty stomach. 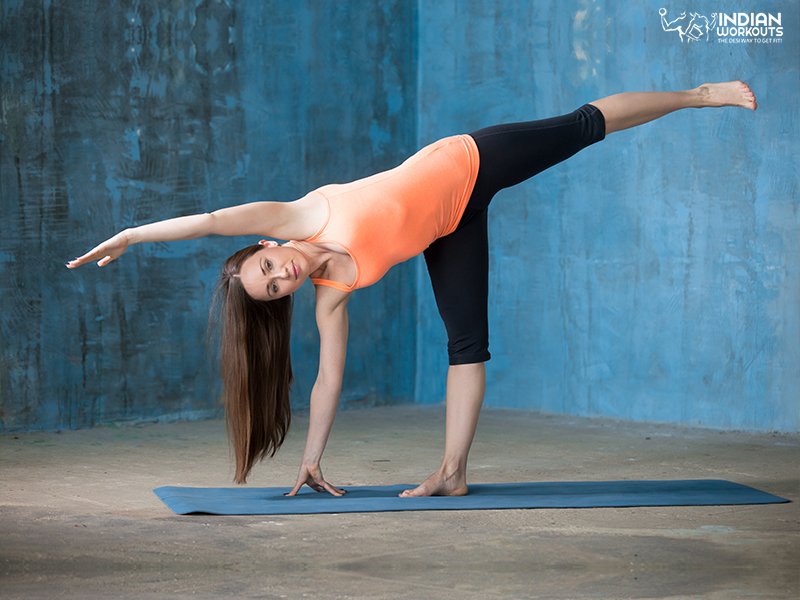 Apart from these power yoga poses, you can also practice markat asana, dolphin pose or Ardha Pincha Mayurasana, Headstand or Sirsasana, Warrior I or Virabhadrasana I, Warrior II or Virabhadrasana II, Boat pose or Navasana, and more. The best part about weight loss with power yoga is that it can be performed at home without any equipment. Also, it’s a great way to combat stress, improve sleep patterns, balance hormones and prevent weight gain. So, are you ready to step on the mat and experience the power of power yoga?

Devi Gajendran is a Post Graduate in Nutrition (University of Madras, Tamil Nadu) and has tons of experience in Fitness and Nutrition. She is the chief advisor and contributes to Indian Workouts website and has her final say on all the segments under fitness, workouts, weight loss and weight gain. She loves sweating it out at the gym and believes that 1 hour should be dedicated to me-time and in her case it is fitness. When not spending time at the gym she loves to listen to lilting melodies of the yesteryears.

Best Pull Up Variations for Muscle Building and Stronger Back

A Beginner’s Guide to Hatha Yoga: How to Begin Your Yoga Journey

All About Ashtanga yoga: A Guide for...

How to Use High-Intensity Interval Workouts for...

Best Upper Back Exercises, The Key To...

10 Best Exercises to Strengthen Your Calf...

12 Effective Exercises to Treat and Eliminate...